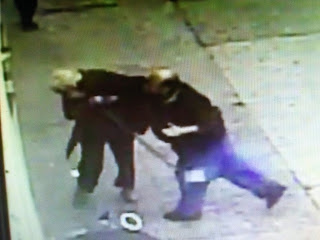 It's a shame the attacks on the elderly that happen in this city.
It needs to be called out and new more harsh laws passed for attacks to seniors.

NY Post reports a good Samaritan wrestled a homeless maniac to the ground after he attacked two elderly women as they were leaving a Brooklyn grocery store on Sunday morning, police said.

Andres Flores allegedly punched the two women — 77 and 79 — after they left the Shoppers World on Pitkin Avenue near Herzl Street in Brownsville at about 9:45 a.m., police said.

The good Samaritan then sprang into action and beat Flores, 45, to the ground, according to a video viewed by The Post.

“C’mon, man, It’s Mother’s Day. Really?” a witness said she heard the good Samaritan yelling as he wrestled with Flores.

“I never saw anything like this in person. You see it on the news, but not in front of you,” Baez said.