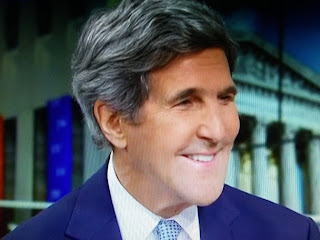 If this story is true and John Kerry is conducting foreign policy on behalf of the United States as a private citizen, then Jeff Sessions needs to issue a warrant for his arrest.
But, since we are no longer a nation of laws, Kerr5y gets to do whatever he wants.  It's a joke!

And he may have broken the law in the process.
What are the details?

In what the Boston Globe described as “shadow diplomacy,” the newspaper broke the news Friday that Kerry — more than a year after leaving office as the top U.S. diplomat — is actively working to keep Obama’s Iran deal in place.

Kerry, one of the top architects of the deal, reportedly met with Iranian Foreign Minister Javad Zarif in New York City two weeks ago to discuss the agreement’s preservation. He also met with several European leaders, including German President Frank-Walter Steinmeier and French President Emmanuel Macron, both in Paris and New York.