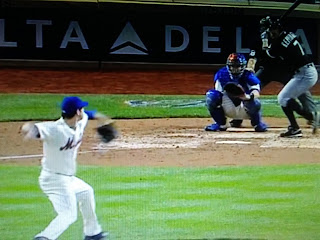 I can't say I'm surprised.  But, yet am sad that a player with so much promise has fizzled because of injury and a bad attitude.

The Score reports Matt Harvey's time with the New York Mets appears to be coming to an end.

The Mets designated the former ace for assignment Friday after he refused a demotion to the minor leagues, per Anthony DiComo of MLB.com.

Mets general manager Sandy Alderson was emotional about the move when he addressed the media, calling it "the end of an era."

"He was appreciated for what he brought to the New York Mets," Alderson added.
The Mets have seven days to trade Harvey, and if they can't find a partner, he'll become a free agent, per The Athletic's Tim Britton.

This season, Harvey has struggled to an 0-2 record with a 7.00 ERA across eight appearances, including four starts. He was switched from the starting rotation to the bullpen by Mets skipper Mickey Callaway on April 21 and was not impressive in four appearances, allowing seven earned runs across six innings.