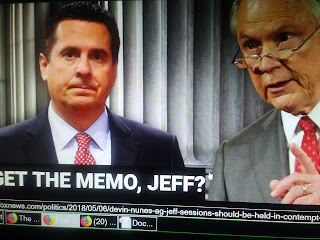 I really didn't expect this but Jeff Sessions is turning out to be the most inept attorney general since Janet Reno.
What the Hell is wrong with this guy?  All this corruption going on under his nose at DOJ and he does nothing about it.  The Deep State really must have a lot of dirt on him because he's nothing more than a statue.

The Californian Republican’s committee has been looking into allegations that the Justice Department and the FBI abused the Foreign Intelligence Surveillance Act in their scrutiny of the Trump campaign.

"On Thursday we discovered that they are not going to comply with our subpoena," Nunes said on "Fox and Friends," adding, "The only thing left to do is we have to move quickly to hold the attorney general of the United States in contempt and that is what I will press for this week."