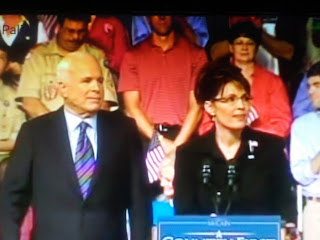 John McCain is really embarrassing himself as he lives his last days in stupidity.
If he had selected Lieberman, he would have lost by an even bigger margin because that would have prevented me and millions of others from voting for him.  Sarah Palin, truth be told, saved McCain's feeble run at the presidency from becoming the biggest trouncing in history.

The Arizona senator, who is battling an aggressive form of brain cancer, admitted his regrets in an upcoming HBO documentary and in his book entitled The Restless Wave, both set for release later this month.

In the book the 81-year-old Republican details wishing he chose Connecticut Senator Joseph Lieberman instead of Palin as his Vice President pick.
In the documentary he touches on choosing Palin, calling skipping out on Lieberman 'another mistake that I made' in his political career.