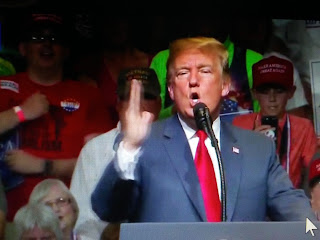 Trump is on a roll!

Daily Mail reports Donald Trump said Thursday that America is respected around the globe again as a result of his leadership as he celebrated the release of three detainees from North Korea at a rally in Indiana.

Trump said his approach to dealing with North Korea is 'leading to some very big things'.
The U.S. president continued: 'And I think that Kim Jong-un did a great service to himself, to his country, by doing this.

'I'll be meeting with Kim Jong Un to secure a future of peace and prosperity for the world and the relationship is good.'