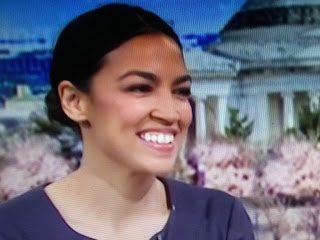 Yes, Socialism!  That's the answer the Democrat Party has to offer.
It's not anything new really.  The Dems have always been socialists.  The young'en are not hiding it.

An activist and member of the Democratic Socialists of America, Ocasio-Cortez won over voters in the minority-majority district with a ruthlessly efficient grassroots bid, even as Crowley -- the fourth-ranking Democrat in the House -- outraised her by a 10-to-1 margin.

This was the first time in 14 years a member of his own party has attempted to unseat Crowley, who chairs the Queens County Democrats. His defeat marks a potential sea change in the broader sphere of liberal politics -- a result with implications for Democrats nationwide that would recall, as optimistic progressives routinely noted during the campaign, former GOP Majority Leader Eric Cantor's loss to the insurgent, tea party-backed Dave Brat in June 2014.