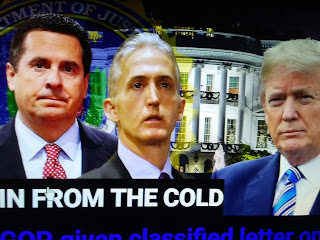 The slow walk investigation that leads to nowhere but talking points continues.
Getting prosecutions don't seem to be the priority of the GOP.

Fox News reports the FBI sent on Friday a classified letter to House GOP officials disclosing whether the agency used top-secret confidential informants in the Trump campaign prior to opening an investigation into Russian election meddling, Fox News has learned.

Congressional Republicans had formally demanded an explanation from the FBI after numerous former Trump officials said they suspected the agency had attempted to infiltriate the campaign.

In a letter to House Intelligence Committee Chair Devin Nunes, R-Calif., obtained by Fox News, the FBI says its confidential explanation outlines whether the "FBI utilized confidential human sources prior to the issuance of the Electronic Communication initiating that investigation."