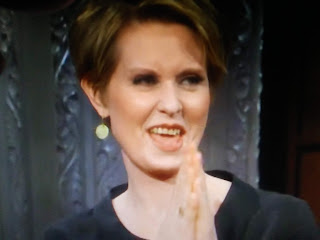 Believe it or not, this the best the Democrat party has to offer for governor of New York.
Andrew Cuomo isn't much better.

NY Post reports actress-turned-gubernatorial challenger Cynthia Nixon labeled the Immigration and Customs Enforcement agency a “terrorist organization” and called for the its abolishment on Thursday.

The Democratic hopeful appeared at St. Paul and St. Andrew United Methodist Church on the Upper West Side to support undocumented Guatemalan immigrant Debora Vasquez-Barrios, a mom of two American kids who fears she’ll be deported.