Where is the Outrage?: Trump rips media for ignoring Angel Families whose loved ones were killed by illegal immigrants 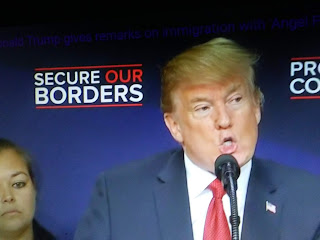 There's no outrage by the corrupt media because illegals who kill Americans doesn't serve their propaganda.

Fox News reports President Trump on Friday blasted what he described as a media double standard on immigration, as he honored families whose loved ones were killed by illegal immigrants and accused the press of ignoring them to focus on the plight of migrants caught crossing the border.
After a week of saturation coverage on illegal immigrant parents separated from their children -- a policy Trump reversed under public and political pressure -- the president stressed that so-called Angel Families have been “permanently separated.”
The families, whose children and other relatives were killed by illegal immigrants, echoed that message during the White House event.
“You don’t hear these stories,” said Steve Ronnebeck, whose 21-year-old son Grant was killed by an illegal immigrant over a pack of cigarettes. “But this is permanent separation.”