Ugly Duckling Rep. Rashida Tlaib: 'We now have a crooked CEO in the Oval Office' 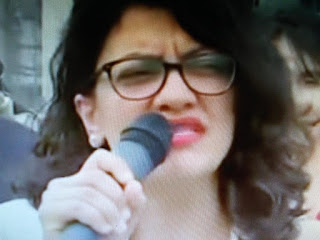 One of the reasons Rashida Tlaib doesn't get as much national media coverage as Alexandria Ocasio-Corteaz and Ilham Omar is because she's not exactly pleasant to look at.
She's just as radical as AOC and Omar.  But, those two are beautiful women and cameras love them.   Tlaib?  Well, as we say in New York, she's a dog!  That's our society.  Pretty people get attention, and the ugly don't.  As far as what comes out of her mouth?  That doesn't matter either.  And it's the same for Ocasio-Cortez and Omar.

AOL News reports Rep. Rashida Tlaib, D-Mich., said she believes President Trump crossed an ethical line on “day one” of his administration.
In a Friday interview with Yahoo News’s “Skullduggery” podcast, she said Trump committed an impeachable offense by not divesting himself from his sprawling real estate empire before entering public office.
“So many people are focused on what happened before he took the oath of office,” she said. “What I am more concerned [about], and what the American people and American public are concerned about is: After he took the oath of office, what has he done?”
She added: “We have a corporation running our government right now.” Tlaib touted 10 million signatures on a petition calling for impeachment, which she received Thursday from advocacy groups, including MoveOn and Need to Impeach.