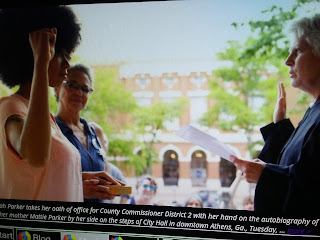 I didn't know one can swear an oath to an auto-biography.
At least she did swear in the Koran.


Washington Times reports one of the new council members in one of Georgia’s biggest cities picked Malcolm X over the Bible for her swearing-in.

Mariah Parker was sworn in this week to represent District 2 on the Athens-Clarke County Commission and refused to take her oath of office on the Bible, the Atlanta Journal-Constitution reported.

“They asked if they would like the Bible and I said no. My mother asked if there was a copy of the Constitution around. No,” Ms. Parker told the AJC.

“I wanted Malcolm’s book,” she said, referring to “The Autobiography of Malcolm X,” which, despite its title, was written by Alex Haley after its subject’s assassination by members of the Nation of Islam.