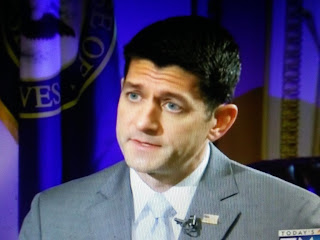 Paul Ryan is a nice enough guy.  But, he's a punk!
He's pure GOP establishment which basically mean he's useless to what needs to be done for the betterment of the country.

Politico reports Paul Ryan has spent much of the past year and a half biting his tongue as Donald Trump totally upended his party. Now, the outgoing House speaker is contradicting the president on the issue he obsesses over most: the Russia investigation.

The Wisconsin Republican gingerly undercut a core Trump talking point during a news conference Wednesday, arguing that he had seen “no evidence” to back Trump’s assertion that the FBI wrongfully planted a spy in his campaign. Ryan also panned Trump’s argument that he has the power to pardon himself.