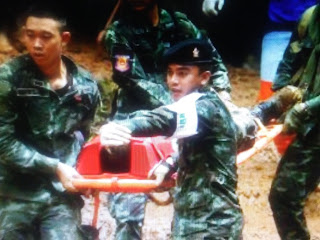 This is an extremely tough rescue.
Getting anybody out is miraculous.  God speed to the Seals.

Fox News reports at least four boys have been rescued from a cave in Thailand on Sunday, hours after 18 divers began their operation to free the 12 boys and their soccer coach, who have been trapped in the flooded cavern more than two weeks, Thai Navy SEAL said.

The first two boys rescued from the cave were taken to the field hospital near the cave, Tossathep Boonthong, chief of Chiang Rai's health department, told Reuters.

“We are giving them a physical examination,"  Boonthong said.