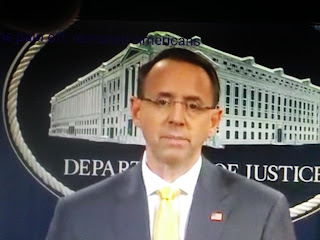 It's pretty obvious to the American people why this announcement was made at this time.
It's as clear as sunshine on a cloudless day that the announcement of these indictments is all about politics and Deep State actors inside the DOJ looking to cast aspersions on President Trump.

I can guarantee with nearly 100% certainty that nothing will come of these indictments just like the last time the DOJ indicted Russian companies for melding in our elections a few months ago.  It's all theater with no substance and our precious DOJ has as much credibility as Bernie Madoff.


AP reports twelve Russian military intelligence officers hacked into the Clinton presidential campaign and the Democratic Party and released tens of thousands of private communications in a sweeping conspiracy by the Kremlin to meddle in the 2016 U.S. election, according to an indictment announced days before President Donald Trump’s summit with Russian President Vladimir Putin.