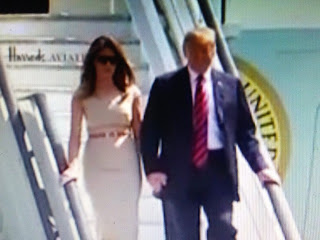 President Trump smartly puts the ball right back on Obama's court because this alleged melding happened right under his nose and he did nothing.

NY Post reports  he remarked on the indictment, unveiled Friday, of 12 Russians for hacking Democrats’ and Hillary Clinton’s emails during the 2016 presidential race, calling out his predecessor for not taking action.

“The stories you heard about the 12 Russians yesterday took place during the Obama Administration, not the Trump Administration. Why didn’t they do something about it, especially when it was reported that President Obama was informed by the FBI in September, before the Election?” Trump wrote at 6:08 a.m.

The Dems will never answer that question because they expected Hillary to win the election and didn't want her win tainted with the mews of Russian melding.
at 7/14/2018 11:01:00 AM