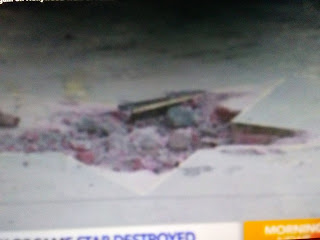 This is really sad.
We got more money in our pockets, the economy is booming, jobs are coming back or are being created, ISIS has been destroyed, we have a real leader in the White House who leads from the front instead of from behind, yet some asshole Leftist is unhappy with it.

KTLA reports Donald Trump’s star on the Hollywood Walk of Fame was vandalized again Wednesday morning.
The president’s star was reduced to rubble after someone apparently used a pickax to destroy it.
Video showed a pickax was left on the ground next to where the star used to be.
Authorities believe the incident on Hollywood Boulevard near the Dolby Theatre occurred about 3:30 a.m.