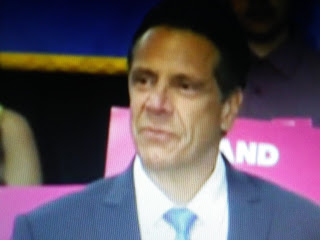 Andrew Cuomo happens to be my governor and I can attest that he's an absolute joke as governor of New York.
He's a horrible public speaker, a far cry from his father Mario who was very powerful one.  Andrew wants to run for president and this stunt is all about getting attention for that run.

Fox News reports ahead of the planned announcement of President Trump’s Supreme Court nomination, New York Gov. Andrew Cuomo signed an executive order to protect abortion and contraceptive coverage in the state.
Since Justice Anthony Kennedy announced his retirement, giving Trump the ability to select his second Supreme Court justice in his first term as president, Democrats have publicly expressed concern that the nation’s highest court, with the addition of a conservative judge, could overturn Roe v. Wade, the 1973 landmark decision that legalized abortion.

Flanked by women holding signs in support of Planned Parenthood, the nation’s largest abortion provider, Cuomo on Monday said Trump plans to roll back Roe v. Wade as part of his plan to “make America great again” and “take us back to the dark days ... before women had the constitutional legal protection to control their own bodies.”