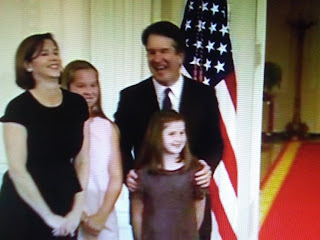 And now the battle begins for real.
But, in the end Trump will get his way.  So, Leftists can suck on it.

"Tonight, it is my honor and privilege to announce that I will nominate Judge Brett Kavanaugh to the United States Supreme Court,"

Trump said in the East Room of the White House to a national television audience.
Kavanaugh beat out three other contenders and federal judges for the nomination, including Amy Coney Barrett, Thomas Hardiman and Raymond Kethledge, to secure Trump's second nomination to the country’s highest court.

"There is no one in America who is more qualified for this position and no one who is more deserving," Trump said of his nominee."