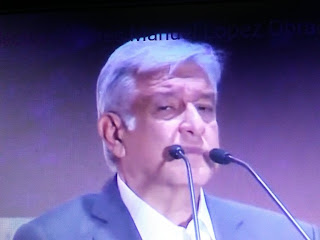 Let's see if this guy can clean up Mexico.  I doubt it.

Fox News reports in an election many Mexicans hope will be a turning point for a country beset by decades of corruption, violence and enduring poverty, voters turned to a left-wing populist some supporters refer to as a “messiah.” A savior from the two major parties that have failed to deliver on promises of reform, in the eyes of many voters.

For months, polls predicted Andres Manuel Lopez Obrador, a 64-year-old two-time presidential runner up, would win the election by a landslide. When the National Elections Institute announced preliminary results Sunday, authorities predicted he would win with between 53 percent and 53.8 percent of the vote, a remarkable margin not seen in the country for many years.