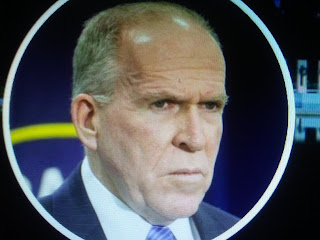 I rarely link to CNN.
But, in this case I'm making an exception to show how insane the people employed there actually are.  Case in point-John Brennan.  This guy is literally bat-shit crazy!  Not only that, he once voted for a devout communist for president.  That by itself disqualifies him in my book from any consideration for anything that comes out his mouth.

CNN reports  former CIA Director John Brennan calling the US President's performance "nothing short of treasonous."  Following his one-on-one meeting with Putin in Helsinki, Finland, Trump declined to endorse the US intelligence community's assessment that Russia interfered in the 2016 election over Putin's denial, saying the Russian President was "extremely strong and powerful" in his denial.

Donald Trump’s press conference performance in Helsinki rises to & exceeds the threshold of “high crimes & misdemeanors.” It was nothing short of treasonous. Not only were Trump’s comments imbecilic, he is wholly in the pocket of Putin. Republican Patriots: Where are you???
— John O. Brennan (@JohnBrennan) July 16, 2018