Ben Shapiro hits Alexandria Ocasio-Cortez on 'catcalling' claims: 'She didn't want to look like she was afraid' 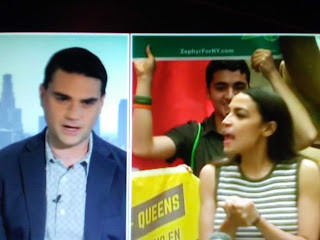 Once again the bartender otherwise known as Alexandria Ocasio-Cortez gets exposed for the lightweight she is.

Fox News reports conservative commentator Ben Shapiro responded Friday to accusations by democratic socialist Alexandria Ocasio-Cortez that he catcalled her in his debate challenge, arguing that she didn’t want to come across as being “afraid.”

In an exclusive interview with Fox News’ Trish Regan, Shapiro was asked for his thoughts on his debate offer being compared to "catcalling" by the House candidate.

While quipping that “catcalling must be very weird in Queens,” Shapiro accused people “on the left” of using a “defense in which anybody who requests a discussion or a debate must be evil by their very nature.”