Pence calls for Space Force to be established by 2020 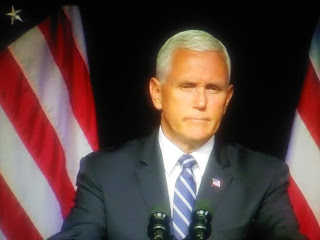 It's the job of a real leader like President Trump to realize what's needed for the protection of the United States.  In the past the Army Air Corps became the Air Force.  This becomes a dedicated force for the sole purpose of dominating space for our safety.

Fox News reports Vice President Pence called Thursday for America to assert its dominance in space as he made a direct appeal to the Pentagon for a sixth military branch serving this purpose -- and revealed the Trump administration wants to create the “Space Force” by 2020.

In a speech to the Defense Department, he said that countries such as Russia, China, North Korea and Iran are pursuing ways to “bring new weapons of war into space itself.”

“As their actions make clear, our adversaries have transformed space into a warfighting domain already and the United States will not shrink from this challenge,” he said. “Under President Trump’s leadership, we will meet it head on -- to defend our nation, and build a peaceful future here on Earth and in space.”