Who is discriminating against who?: Uber, Lyft, DC restaurants to ban 'Unite the Right' rally participants; 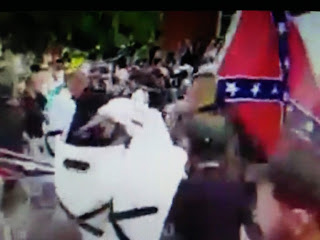 It's wrong for these businesses to deny services based on political differences.
They become guilty of the very thing they are acting against.


Fox News reports white supremacists and white nationalists heading to Washington, D.C., for Sunday’s second Unite the Right rally may have trouble finding a way to get there or a place to eat, according to reports.

The rally comes on the one year anniversary of white supremacist violence in Charlottesville, Virginia, where on Saturday, police blocked off streets and mobilized hundreds of officers downtown as a precaution.

Early Saturday afternoon, a group of 20 Antifa protestors with fists in the air marched through downtown Charlottsville holding a flag saying “Antifascist action.”

Meanwhile, in preparation for the rally near the White House, Uber and Lyft told drivers they have a right to kick a passenger out of car if they are harassed or threatened, The Washington Post reported.
At the same time, the Restaurant Association of Metropolitan Washington sent out a toolkit informing restaurateurs of their legal rights to refuse service to white nationalists and other political fringe groups, The Washingtonian reported.