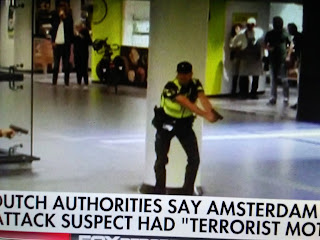 Western Europe has become a lot more dangerous
since Muslims with bad intentions invaded these countries.

Fox News reports two Americans who were stabbed Friday night at a train station in Amsterdam were targeted by an Afghan citizen who had a “terrorist motive,” officials say.
City authorities said the 19-year-old suspect, identified only as Jawed S., appeared to target the American tourists in a stabbing attack at Central Station just after noon on Friday.

"Based on the suspect's first statements, he had a terrorist motive," the city administration said in a statement on Saturday. They did not elaborate on what the statements were or in what ways they might have shown intent.