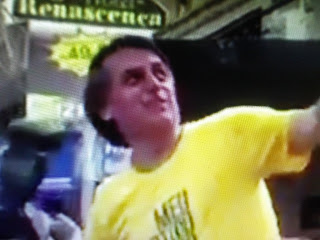 If Bolsonaro survives, he's a lock to become the next president of Brazil.
He's pro-life and anti-LGBT.  So he's a good man Brazil needs to drain their swamp.  That's why they tried to kill him.

The Guardian reports Jair Bolsonaro, the far-right candidate who is leading the polls in Brazil’s presidential race, is in a serious condition after being stabbed while campaigning just a month before the election.

Bolsonaro was rushed to the Santa Casa de Misericórdia hospital in the town of Juiz de Fora, about 125 miles (200km) north of Rio de Janeiro, where a spokeswoman confirmed he was in surgery.
Bolsonaro's son Flávio initially described the wound as “only superficial”, but later said that the injuries were more serious, tweeting that the candidate arrived at the hospital “almost dead” after losing a lot of blood.