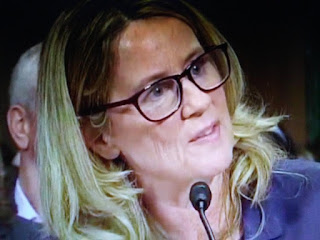 There's a whole lot of information on Ford that's being ignored by the mainstream media.
Their agenda is to portray her as a victim of sexual abuse-period!


InFoWars reports testifying under oath before the Senate Judiciary Committee, Christine Blasey Ford identified herself as a ‘psychologist,’ but records indict this is a false statement under California law. Someone at Stanford University also appears to have caught the blunder and edited Ford’s faculty page.

Just one sentence into her sworn testimony before the Senate Judiciary Committee regarding allegations of sexual assault against Supreme Court nominee Brett Kavanaugh, Dr. Christine Blasey Ford may have told a lie.

After thanking members of the committee on Thursday, and while under oath, Ford opened her testimony saying, “My name is Christine Blasey Ford, I am a professor of psychology at Palo Alto University and a research psychologist at the Stanford University School of Medicine.”

The issue lies with the word “psychologist,” and Ford potentially misrepresenting herself and her credentials, an infraction that is taken very seriously in the psychology field as well as under California law.