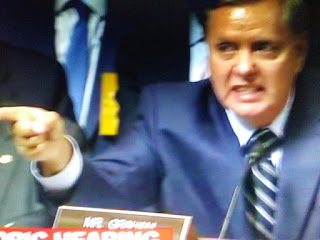 Regular readers of this blog will know that I have had many problems with Lindsey Graham.
I've made fun of him and have said nasty things about him because he's not my favorite Republican.  But, today he got me out of my seat in response to his passionate and strong defense of Brett Kavanaugh.  He ripped the Democrats a new one and deservedly so.

Fox News reports Sen. Lindsey Graham, R-S.C., let loose on his Democratic colleagues Thursday over what he called the "sham" hearing to probe sexual assault allegations against Brett Kavanaugh, in a display that earned him praise from the White House and scorn from the left
Graham blasted Democrats toward the end of the Senate Judiciary Committee hearing with the Supreme Court nominee and accuser Christine Blasey Ford. She alleges Kavanaugh forced himself on her when both were high school students in the 1980s.

But Graham alleged the Democrats' handling was all about politics.
"This is the most unethical sham since I've been in politics,” a visibily angry Graham said from the dais while pointing at Democratic senators. “And if you really wanted to know the truth, you sure as hell wouldn't have done what you've done to this guy.”