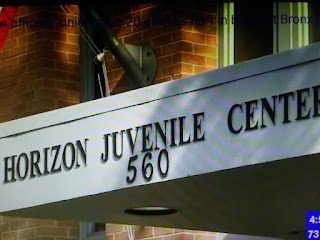 In the state of New York that is run principally by Democrats quality of life suffers needlessly.
Here's another crystal clear example.  In their zeal to coddle criminals, Dems have decided to take a step backward and refuse to treat teenage criminals as adults.  That's bad enough. In addition to that dumb decision, Dems have also passed a new mandate prohibiting the usage of pepper spray by correction officers on teen inmates.  This has created an extremely dangerous environment and correction officers are paying the price.

NY1 reports 18 correction officers were hurt Sunday breaking up a fight between teenagers at a Bronx teenage detention facility, according to the officers' union, the second melee at the center this week that has led to more than a dozen officers getting hurt.

The union, the Correction Officers' Benevolent Association, said 16 officers and two captains were transported to a local hospital after intervening in a fight this afternoon between 13 inmates in a mess hall at the Horizon Juvenile Center on Brook Avenue in Mott Haven.

"How many Correction Officers have to have their noses broken until the Governor and the Mayor wake up and shut down this facility? This population of inmates at Horizon is the same population at Rikers who are responsible for the majority of the violence throughout the department. Why would we expect them to behave any differently now?" Elias Husamudeen, the president of the union, said in a statement after the fight Sunday. "We cannot and will not allow Mayor de Blasio and Governor Cuomo to ignore this crisis and to make the attacks on our members the new normal."