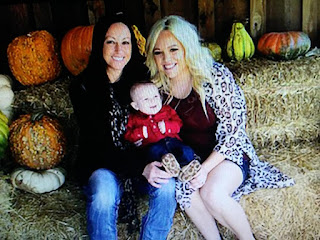 This reminds me of the scene in Jurassic Park in which Jeff Goldbloom's character says, "You're scientists were so preoccupied with whether or not they could they didn't stop to think about if they should."
Morally this is a mind field starting with same sex marriage and ending with manipulating reproduction functions in humans.  It's dangerous territory.


NY Post reports in a medical first, two mothers have carried the same baby: Ashleigh Coulter gave birth to a son both she and her wife Bliss Coulter carried, thanks to a breakthrough method of in vitro fertilization.

The method, called Effortless Reciprocal IVF, allowed Bliss to incubate her own embryo. Then, the embryo was placed inside Ashleigh, where it grew until she delivered: In June, Stetson was born at a healthy 8 pounds, 3 ounces.

“I’m excited to put all this in his baby book!” Ashleigh, 29, tells The Post of the medical breakthrough.

The couple from Texas sought out the treatment because they wanted a way for both of them to be involved in the pregnancy.