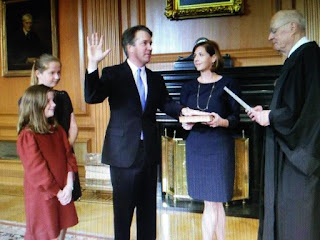 Finally!  The good guys won, defeating the forces of evil that is the Democrat Party!

AP reports Brett Kavanaugh was sworn in Saturday night as the 114th justice of the U.S. Supreme Court, after a wrenching debate over sexual misconduct and judicial temperament that shattered the Senate, captivated the nation and ushered in an acrimonious new level of polarization — now encroaching on the court that the 53-year-old judge may well swing rightward for decades to come.

Even as Kavanaugh took his oath of office in a quiet private ceremony, not long after the narrowest Senate confirmation in nearly a century and a half, protesters chanted outside the court building across the street from the Capitol.