Caravan of migrants swells to 7,000 and stretches more than a mile long as they continue marching towards the U.S. border - but Trump warns full efforts are being made to stop the 'onslaught of illegal aliens' 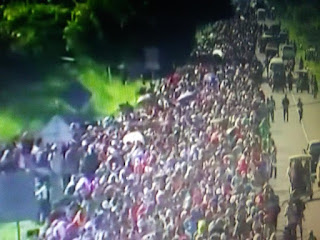 I do not believe the reasons given for this caravan.
Supposedly these people are leaving a bad situation in Honduras.  So they leave in October as harsher weather approaches?  No way.  This is a brought and paid for effort by rich Liberals looking to force a confrontation with the United States.

Daily Mail reports the throng of Central American migrants advancing toward the U.S. border in southern Mexico has now swelled to a whopping 7,000 people as they defy the efforts of four governments to break them up.
Thousands of mostly Honduran migrants rose at dawn on Sunday from the shores of a river between Guatemala and Mexico and continued their trek northward, overwhelming Mexican government attempts to stop them at the border.
Their numbers swelled from 2,000 to about 5,000 overnight and at first light they set out walking toward the Mexican town of Tapachula, 10 abreast in a line stretching approximately a mile. That number has now reportedly risen to 7,000.
Several hundred more already had applied for refugee status in Mexico and an estimated 1,500 were still on the Guatemalan side of the Suchiate River, hoping to enter legally.