Muslim attacks Jew in the streets of Brooklyn caught on video 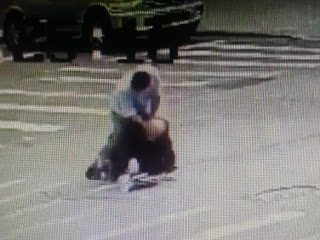 The mainstream medias is not reporting this as a hate crime.
Guess why?  Corrupt media is pro-Muslim and anti-Jew, that's why.

NY Post reports a livery driver hopped out of his car and beat a pedestrian in the middle of a Brooklyn street early Sunday in an apparent incident of road rage, as a surveillance camera captured the frightening incident.

Afzal Farrukh, 37, was driving at 46th Street and 13th Avenue in Borough Park at around 7:30 a.m. when he slammed on the brakes, jumped out of his vehicle and started pummeling Lipa Schwartz, 62, who was wearing traditional Hasidic attire, cops said.

I'm horrified by this unprovoked vicious assault on an elderly member of our community. Justice needs to be served swiftly and fully. Thank you @BPShomrim and @NYPD66Pct for the quick response. pic.twitter.com/ET9ReklotR
— Barry Spitzer (@bspitzer) October 14, 2018