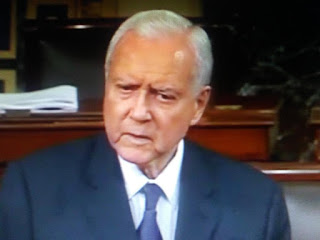 Sen. Orin Hatch gives an eloquent defense of Judge Brett Kavanaugh, a man smeared by vicious and deceitful Democrats in a most ugly way.

CNS News reports Sen. Orrin Hatch (R.-Utah), who has served in the Senate since 1977, went to the Senate floor today to offer a point-by-point analysis of what he called “inconsistencies and puzzling aspects” in the story Dr. Christine Blasey Ford has told in making her allegation that Judge Brett Kavanaugh sexually assaulted her 36 years ago.

Hatch started out by acknowledging the seriousness of Ford’s allegation—but, then, he did not hold back from systematically walking through elements of her story that he said “call into question the reliability of her account.”

“[T]here is no corroborating evidence to Dr. Ford’s claims,” he concluded.