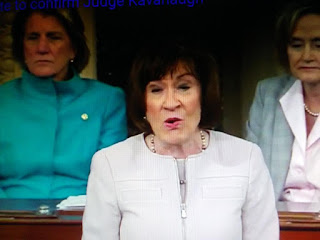 I really had my doubts about Collins coming through for Kavanaugh.
But, he speech in the Senate chambers was historic.

Bangor Daily News in a defining moment of her political career, Sen. Susan Collins of Maine said Friday she will join fellow Republicans in voting to confirm Brett Kavanaugh to the U.S. Supreme Court in a move likely to clinch President Donald Trump’s second nomination to the high court.

Collins has been under immense pressure since the Republican president nominated Kavanaugh in August. It heightened last month after three women — including California professor Christine Blasey Ford — accused him of sexually assaulting them when he was a young man. He has denied all allegations.

The Maine senator’s Friday afternoon announcement came just hours after she sided with 49 fellow Republican senators in a key procedural vote to advance Kavanaugh’s confirmation, which will likely take place on Saturday.