Pittsburgh synagogue gunman, 46, who screamed 'all Jews must die!' as he shot dead at least eight and left six injured opening fire with an AR-15 before surrendering 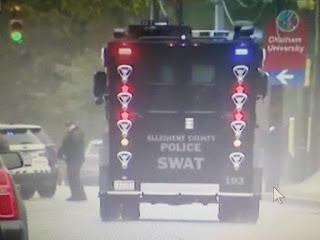 Daily Mail reports the antisemitic gunman who opened fire on a Pittsburgh synagogue on Saturday morning, killing eight and injuring six more, has been named as 46-year-old Robert Bowers.

Bowers opened fire at the Tree of Life Congregation Synagogue in the Squirrel Hill area of Pittsburgh shortly before 10am.

He burst through the synagogue's doors and opened fire on a Shabbat service congregation on the main floor where around 40 to 50 people had gathered, shouting 'all Jews must die!'.

After killing three people on the main floor, he went downstairs, where the New Light congregation was gathering in the basement, and opened fire there.