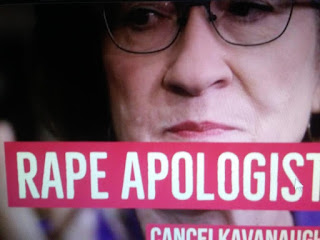 These Leftists are truly evil in my opinion.
They don't listen to reason or evidence of any situation.  They're programmed robots, exactly the way the Democrat Party wants them to be.  A mob!

Breitbart reports Sen. Marco Rubio (R-FL) disparaged efforts by Democrats and left-wing activists to intimidate Sen. Susan Collins as she made her decision on whether to vote in favor of Judge Brett Kavanaugh’s nomination to the Supreme Court, describing their tactics as “vicious, vile, and dangerous.”

On Friday evening, Collins delivered an extended defense of Kavanaugh’s record and announced her intention to vote in favor of his confirmation. The decision came as a major blow to left-wing activists who had used threats and intimidation to swing Collins in favor of a no vote after she was identified as one of three moderate Republicans who may cave in to pressure over uncorroborated allegations of sexual assault.