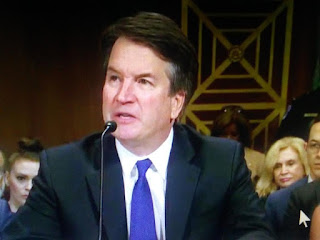 The media's deceitful coverage of Brett Kavanaugh is a bigger indictment on them than on him.
They've shown the world that they political activists instead of impartial journalists.  This is why millions of Americans don't trust the media and hold them in low regard.

Multiple media outlets accused Kavanaugh of lying about the term “devil’s triangle” in his high school yearbook, which Democrats claimed was a reference to a group sex act. When asked by Democratic Vermont Sen. Patrick Leahy, Kavanaugh said that “devil’s triangle” was a drinking game played with quarters and three cups. The Huffington Post called Kavanaugh’s explanation a “lie.” Seven witnesses — including the classmate credited in the yearbook for inventing the game — have corroborated Kavanaugh’s account of “devil’s triangle.” Politico on Thursday published a video that cited the website Urban Dictionary to suggest Kavanaugh was lying. Politico later deleted the video and issued an apology for its “outdated information.”