Trump: Anyone who votes for a Democrat is crazy, Nevada rally 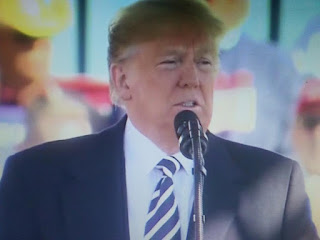 What are Democrats running on?
Trump hatred? That's not enough to turn back the clock to a dead economy, no job growth, open borders and increase in crime and misery.

Trump was wrapping up a visit to Western states with an afternoon rally in rural Elko, Nevada, and lending support for Dean Heller, considered the most vulnerable GOP senator on the Nov. 6 ballot as Republican hope to retain their Senate majority.

Trump has used his appearances in Montana and Arizona to try to frame the choices for voters in the upcoming election, contending Democrats are "too extreme and too dangerous" to take control of Congress. He has sought to focus on immigration as one of the defining election issues and has accused Democrats of wanting "open borders" and encouraging illegal immigration.

"Anybody who votes for a Democrat now is crazy," Trump said.