What a Bonehead!: Giants rookie quarterback arrested after nearly running over cop 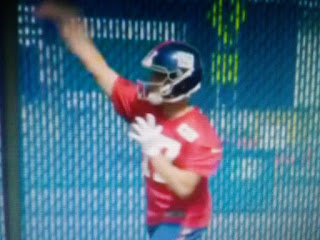 With Eli Manning on the ropes holding onto his career by his fingernails, Kyle Lauletta tosses away his opportunity to become the new starting QB for the football Giants.

NY Post reports New York Giants backup quarterback Kyle Lauletta — who some fans were hoping would replace struggling star Eli Manning — was busted in New Jersey on Tuesday morning for pulling an illegal turn and nearly clipping a police officer with his car, according to police.
The 22-year-old rookie from the University of Richmond was on his way to Big Blue’s practice facility in East Rutherford when he was nabbed for driving in a “dangerous manner” around 8 a.m., Weehawken police said.
Lauletta was in his 2017 Jaguar when he allegedly made an illegal turn onto Route 495 West at the congested Pleasant Avenue approach.