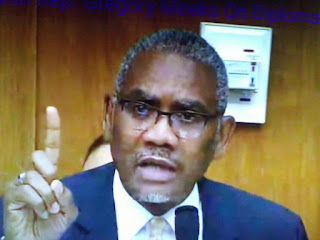 The Republican Party needs to answer why didn't they submit a challenger for this seat?
This is an example of my contention that the GOP intentionally didn't try to keep in control of the House to screw President Trump!

Who is Gregory Meeks?

This is not the only example:

GOP put up a weak candidate against Alexandria Occasio-Cotez in NY's 14.  She won with nearly 80% of the vote.  It wasn't even a contest.

Republican John Faso lost in NY's 19th (The Catskills, Hudson Valley) to Democrat and former rapper Antonio Delgado.  Faso got no support from the GOP while Delgado flooded the zone with political ads.  The GOP let Faso lose.

The GOP allowed Dan Donovan to twist in NY's 11th, got no support from GOP and lost his race to Democrat Max Rose.  Rose comes off like a Guido delivering pizza in a district composed of Staten Island and southern Brooklyn.

Both the 19th and the 11th were very winnable races.  No way Democrats should be winning these seats in Republican strong holds.  But, that wasn't the plan for the GOP establishment and they need to answer for it.
at 11/07/2018 06:54:00 AM