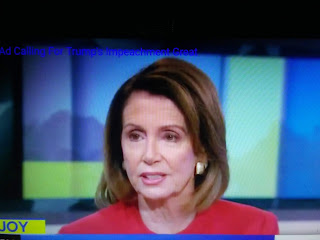 Like I said previously I've been very skeptical of the conventional wisdom put out by the mainstream media that predicts a takeover of The House by the Democrat Party.
What would be the rationale for it with a booming economy, record low unemployment and a real leader in the White House the American people haven't seen since Ronald Reagan?

They’ve been nervous since day one. Since I declared my candidacy in April 2017, they’ve been nervous. And it shows right now. Nancy Pelosi has spent well over half-a-million dollars in the last week to try and distort my campaign,” the Republican nominee in New Hampshire’s 1st Congressional District said Saturday.

While Pelosi might not actually be losing sleep over Edwards’ candidacy, his race does represent somewhat of a wild card among the dozens of competitive House contests being held Tuesday.