Puerto Ricans may have elected Rick Scott and other midterm surprises 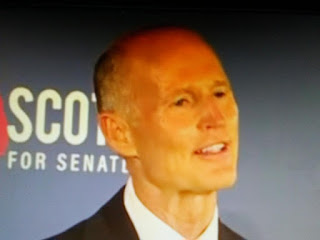 This factoid points to Puerto Ricans not being an automatic votes for the Dems.
As demonstrated by yours truly.

The Hill reports the narratives of the midterm elections were set when suburban voters turned against President Trump, women racked up record numbers of electoral wins and Republicans dominated rural states and counties.

But dive deeper into the results and some more surprising storylines emerge, from familial ties to long shot candidates, expanding suburbs and new battlegrounds.

Here are the overlooked stories that didn’t get enough coverage after the polls closed.
Did Puerto Ricans elect Rick Scott?

When Hurricane Maria left Puerto Rico devastated in 2017, almost 400,000 of the island’s residents moved to the mainland. Many of them landed in Florida, where Gov. Rick Scott’s (R) administration set up welcome centers in airports in Orlando, Tampa and Miami.