GOODWIN: Dems really do love Republicans -- when they're dead... 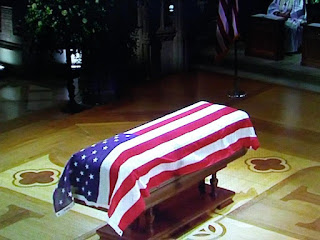 The only good Republican, according to the Democrats and the mainstream media, is a dead Republican.
MichaelGoodwin of the NY Post says it better.

He was a patriot, a hero, a ­genial gentleman and a great American. You can’t pick up a newspaper or go near a television without hearing leftists gush with praise for the late President George H.W. Bush. Who knew they felt this way?

And you are not mistaken if the outpouring of previously unknown affection for the first President Bush sounds familiar. That’s because it is almost identical to the loving send-off the same suspects gave Sen. John McCain after he died in August.

It all just goes to prove that Democrats and their media handmaidens really do love Republicans — when they’re dead. All the more so if, when they were alive, they ­opposed President Trump.

There were reports that both Bush and McCain voted for Hillary Clinton in 2016. See, good Republicans.McCain’s feud went beyond the grave, when it became known that he did not want Trump at his funeral. McCain got extra love for that ­final bit of pettiness.

Paradoxically, Bush gets extra credit because he wanted Trump at his funeral, even though both gestures are seen as a rebuke to the current president. In this case, Bush is hailed for rising above pettiness.