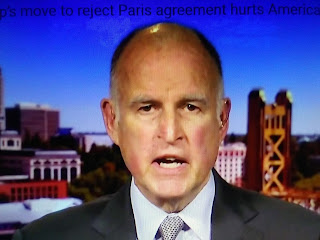 In all his years in office California Gov. Jerry Brown couldn't figure out how to clean up the piles of human feces on the streets of San Francisco.
Yet, we're suppose to head his warning about a bogus issue of man-made climate change?  I don't think so, Jerry!


NBC News reports California Democratic Gov. Jerry Brown warned that America and the rest of the world are falling behind in the fight against climate change and likened the challenge to fighting the Nazis in World War II.

In an interview for Sunday's "Meet the Press," the outgoing governor called on President Donald Trump to take the lead in addressing the issue.

"Instead of worrying about tariffs, I'd like to see the president and the Congress invest tens of billions in renewable energy, in more-efficient batteries, to get us off fossil fuel as quickly as we can," Brown said.