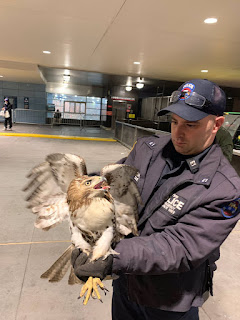 I've seen pigeons in Penn station before.
But, a Hawk?  That's amazing!

MTA employees spotted a red-shoulder hawk chasing a pigeon into an overwise-empty transit booth just before 10 p.m. on Sunday night and called the cops for assistance when the raptor wouldn’t leave.