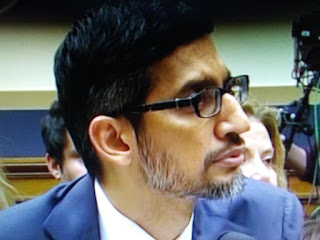 Google had an office down the hall from the Oval office during the Obama regime.
The truth is Google actively censors conservative content and manipulate its search engine in favor of Liberal ideology.

It was Sundar Pichai's turn in the congressional hot seat.

Google's CEO testified before the House Judiciary Committee on Tuesday for 3.5 hours while lawmakers grilled him on a wide range of issues, including potential political bias on the company's platforms, its plans for a censored search app in China and its privacy practices.

This is the first time Pichai has appeared before Congress since Google declined to send him or Alphabet CEO Larry Page to a hearing on foreign election meddling earlier this year. That slight sparked anger among senators who portrayed Google as trying to skirt scrutiny.