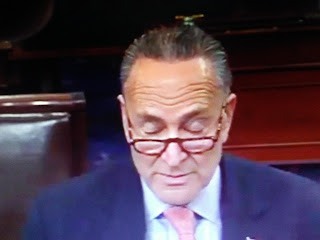 Mitch McConnell should go to the nuclear option and pass the bill using a simple majority the same way Democrats passed ObamaCare.

CNS News reports an estimated 25 percent of the federal government shutdown at midnight on Friday night because the U.S. Senate would not pass—or even vote on—a House-passed continuing resolution that would fund that part of the government and that included money to fund a wall along the U.S.-Mexico border.

“President Trump, you will not get your wall,” Schumer said. “Abandon your shutdown strategy. You are not getting the wall today, next week, or on January 3 when Democrats take control of the House.”