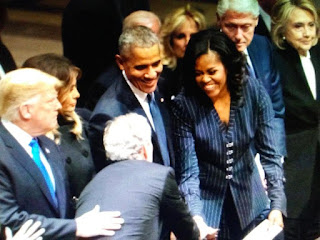 If there's a positive about the passing of President Bush is that the country was able to witness what genuine class and dignity looks like at a funeral.
That was the case with John McCain's funeral.


NY Post reports the funeral of George H.W. Bush brought together the nation’s most exclusive club — every living president.

They sat side-by-side with their wives in the front row of Washington National Cathedral, a scene made for the history books, as George W. Bush sat across the aisle with his family.

Barack Obama, Bill Clinton and Jimmy Carter chatted easily among themselves before the service began and before the arrival of President Trump and first lady Melania.

A few rows back, Chelsea Clinton was spotted in discussion with Ivanka Trump.