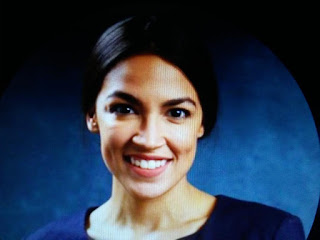 I don't think this former bartender is going to survive her two term in Congress.
Almost on a daily basis she demonstrates what a blithering idiot she is.  But, she's exactly what her generation is--ignorant and arrogant at the same time.  They don't know what they don't know but they think they know more than anybody else.  That's a dangerous combination of stupidity.

The Federalist co-founder Sean Davis put Ocasio-Cortez in check by reminding her that threatening Trump Jr. violates House Ethics. Imagine that! She's violating ethics before she even gets to Washington, D.C.!

I have noticed that Junior here has a habit of posting nonsense about me whenever the Mueller investigation heats up.

Please, keep it coming Jr - it’s definitely a “very, very large brain” idea to troll a member of a body that will have subpoena power in a month.

Are you threatening to use your power as a federal official to subpoena anyone who mocks or otherwise disagrees with you on the Internet? https://t.co/6Ymzqb2Y6Y
— Sean Davis (@seanmdav) December 7, 2018

It's worth noting that the official House Ethics Manual explicitly prohibits the kind of threat that @Ocasio2018 just issued against @DonaldJTrumpJr for his refusal to support her political agenda. https://t.co/rJ83EeZXGY
— Sean Davis (@seanmdav) December 7, 2018